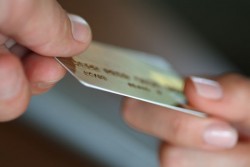 Some customers at Barnes & Noble are victims of stolen credit card information!

Today, October 24, 2012, it was announced that Hackers attacked Barnes & Noble in 63 stores across the country. The stores hit included Barnes & Noble in New York City, San Diego, Miami and Chicago, according to people that were briefed on the investigation.

The national bookstore chain said in a statement it “found evidence of tampering” in electronic devices used to process debit and credit card transactions. The company said it was working with banks and credit card companies to identify accounts that may have been compromised so it can employ enhanced fraud security measures on “potentially impacted accounts.”

It was reported that the hackers stole credit card information from customers who have shopped as recent as this past month. The company discovered this point of entry into their system happened around September 14, 2012, but kept it quiet at the Justice Department’s request. The F.B.I. was desiring more time to see who was behind the attacks.

How Did the Hackers Gain Entry?

Hackers are not concerned about who you are, what you have worked hard for, but are determined to obtain your identity and your money for their own gain.

There are many ways a company like Barnes & Noble’s tries to locate the area of entry from the attackers. In this case it was reported:

“The company determined that only one keypad in each of the 63 stores had been hacked. Nevertheless, the company has not re-installed the devices.”

“This is no small undertaking,” said Edward Schwartz, the chief security officer at RSA, a security company. “An attack of this type involves many different phases of reconnaissance and multiple levels of exploitation.”

“The company said that purchases at its college bookstores and on BarnesandNoble.com, Nook, Nook mobile apps and its member database were not affected by the hacking. It did not say, however, whether it would now be telling individual customers that their information had been stolen.”

How Do these Types of Attack Occur?

We know that they can come from an external source as well as an internal source. The hackers attack by using malicious codes, or perhaps a tactful encounter with an employee to perform a simple act that unleashes a malicious link that installs malware into the keypad. Yes! Malicious hackers are very devious, manipulative and determined to obtain and secure a gateway into a system to obtain a means to fill their pockets and destroy many businesses at someone else’s expense.

How Can You Protect Yourself?

If you think you may have been affected by the hacker attack at Barnes & Noble stores, we advise that you get your PIN number changed on your debit card as soon as possible.

In addition, you should protect yourself from identify theft with a service like LifeLock.

Does this make you feel safe when you are shopping?  We want to hear from you. Please leave your comment below.